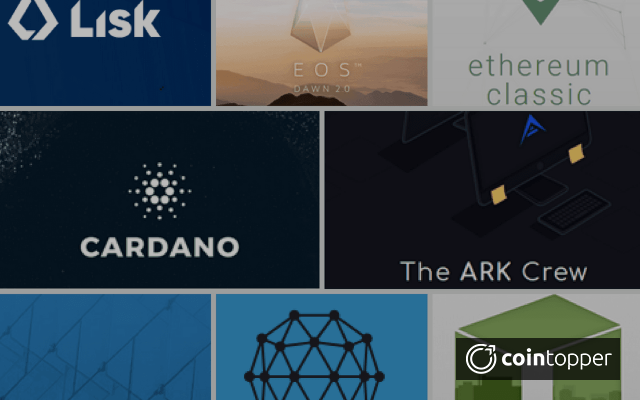 Ethereum is ranked as the most popular smart contract platform. Yes, Bitcoin also does smart contracts but is not known for its smart contract functionality as Ethereum is! The term, Smart Contracts, was promoted by Ethereum. Its capability of possessing a network for ERC-20 tokens (known as a standard for any upcoming ICO tokens) and providing a framework for building decentralized applications has made the Ethereum blockchain the top selection for the developers.

But today, when many other platforms providing the smart contracts functionality have hit the market, it's likely for the Ethereum platform to be replaced by some major alternatives available.

Some of these are listed below:

Ethereum Classic was formed as a result of a fork in the Ethereum blockchain. It carries all the features and technicalities of the original Ethereum but at a quite lower cost. ETC is also believed to be a better version of ETH as it doesn't reverse the transactions as ETH does. Ethereum Classic operates as a separate entity to Ethereum.

The Ethereum has planned to swift from Proof-of-work to Proof-of-stake, or another type of algorithm by which a blockchain network aims to achieve consensus. While the Ethereum Classic will stay on Proof-of-work.

The price of ETC will skyrocket if people start switching to Ethereum Classic. Note that the reason why Ethereum takes a large portion in the market now is that there are tons of projects that are built on top of Ethereum and they need to pay in ether in order to run their programs. Currently, the price of ETC is almost 23 times lower than ETH. However, it’s also believed that the ETC might not follow the future changes done to Ethereum.

2. The price of ETC will skyrocket if people start switching to Ethereum Classic. Note that the reason why Ethereum takes a large portion in the market now is that there are tons of projects that are built on top of Ethereum and they need to pay in ether in order to run their programs. Currently, the price of ETC is 23 times lower than ETH.

1. Most major developers are supporters of the new hard forked Ethereum. The community of ETC is quite small, and most people buying it are not real users that use the token to execute programs.

2. Ethereum Classic may not follow the future changes made to Ethereum.

3. It is said that many ETC buyers are Bitcoin supporters that don’t want Ethereum to succeed.

The NEO blockchain platform is the first to be launched as an open-source blockchain project in China and hence it's popularly known as Chinese Ethereum. Like Ethereum, NEO also provides the decentralized network and also the smart contracts platform without any third-party indulgence.

However, NEO has a number of factors where it outperforms Ethereum by a fair number. Such factors include the scalability in terms of higher number of transaction processing at once, multi-language support as compared to Ethereum's only language - Solidity, no hard forks, and many others.

Soft Fork is possible but not Hard Fork because, it wants to prevent any random hard forks like the Ethereum/Ethereum classic debacle, so it is coded to avoid this entirely.

We cannot mine NEO, instead, the token holders are given NEO GAS.

1. NEO had success in developing digital assets that being their focus іn 2016 when they were called Antѕhаrеs.

1. All are fighting for a root chain. So, can be many root chains.

2. Legislative unknowns should make NEO be approached with саutіоn аѕ well as all сurrеnсіеѕ built in the very ѕtrісt governmental system of China.

With the feature of smart contracts inculcated in Stratis, it's one of the competitors of ethereum in the said domain. Stratis makes the blockchain implementation extremely flexible for the companies as it itself builds the complex blockchain framework for them.

1. The developers can easily build a decentralized blockchain quickly and easily. It can be written in C# and using .NET framework.

2. STRAT is aiming to provide a solution to business to ensure that they саn tеѕt and dерlоy projects ԛuісkly and with a high level of ѕесurіty.

Unlike many other platforms built out of complex programming languages, Lisk solves this obstacle as it uses Javascript, which makes it easy for any developer to jump in.

Lisk introduces the concept of 'Side Chain' paired with an SDK which allows the developers to build their blockchain and the decentralized apps on it while keeping it secure by attaching it to the main LISK blockchain. These side chains operate separately from the main blockchain. Hence, there is no effect of the happenings of Sidechains on the main network while still remaining secure as it's maintained by the main blockchain network.

More about Lisk at Lisk.io

2. It is oriented towards App Developers.

1. There is only one drawback of the Lisk ecosystem, which is the extended block time.

EOS claims to be the most powerful infrastructure for decentralized applications. Basically, EOS consolidates the security of Bitcoin and the smart contracts and dApp functionality from Ethereum to make it the most scalable blockchain platform.

EOS targets every feature that a developer may need to build the full-fledged decentralized application on this platform. It is fully run with the people's consent and approval. The community votes for any changes required on the running applications. EOS promises zero transaction fees.

20% of the EOS token ѕuррlіеѕ were ѕоld for about $185M in ETH оvеr the first 5 days of the 341-dау long taken ѕаlе and 10% werе reserved fоr blосk.оnе while remaining 70% of EOS tokens would be рrоduсеd and sold at market vаluе.

1. The plan of EOS is used by the mainstream. The EOS is built in a such a way that it can be scalable and again upgradable.

2. Dan Larimer is behind of EOS. As he has completed his work in with EOS. Still, he is supporting to EOS.

1. EOS is not different from any other cryptocurrency.

2. EOS still needs to pick up by the mainstream.

ARK is a decentralized cryptocurrency ecosystem that is designed to increase user adoption of blockchain technology. The ARK Crew, want to create development kit that makes deploying your own blockchain easy and efficient. They want their platform to be used as a bridge between various blockchain.

The SmartBridges, Alternative Programming Languages, and Push Button Deployable Blockchains are the features being built by ARK Crew. ARK is using Proof-of-Stake for verification.

1. The speed of network.

1. Promotes holding instead of Spending – A return that users can get from voting means that people are more likely to hold their ARK instead of selling it.

Qtum emerged in 2016 and Qtum was viewed as a potential disruptor that could connect amongst Ethereum and Bitcoin ecosystems. It is the hybrid blockchain platform that allows building DApps for mobile devices.

Qtum can host ICOs and it is compatible with ERC20 standards. It also supports SegWit and has a built-in system leveraging smart contracts called the Decentralized Governance Protocol (DGP)

It enables clients to change the blockchain parameters rapidly and flawlessly without disturbing the biological community. For instance, when a system is updated through DGP, the hub administrators won't need to take any activities, and Qtum clients won't need to download new software.

2. Qtum is using Proof of Stake, so there's no possibility of centralization of energy in the hands of a couple of mineworkers or mining pools

3. For quicker verification, Qtum is using UTXO method for transactions.

2. The UTXO model is difficult to use with a smart contract.

Cardano is a decentralized public blockchain and is fully open source so the source code is made available for use or modification as users or other developers see fit. Cardano is in a race to develop smart contract platform and it is capable to deliver more advanced features. The development team of Cardano includes a large global collective of expert engineers and researchers.

Cardano is a cryptocurrency project that aims to create a next-generation smart contract platform and ecosystem. Cardano’s blockchain platform was the first ever blockchain to evolve out of a scientific philosophy and a research-first driven approach. The goal of this project is to improve scalability, governance, security, and interoperability with traditional financial systems and regulations. The Cardano’s goals are different from Ethereum but the innovations can be directly compared to Ethereum.

1. Charles Hoskinson is the CEO, was involved in the development team of Ethereum. He was one of the original co-founders of Ethereum.

2. The white paper is a technical masterpiece with detailed analysis.

3. Cardano is trying to solve the biggest problems, the cryptocurrency industry is facing such as scalability and democratized voting.

1. None of the planned features are currently in place.

Along with the above-explained ethereum alternatives, there are plenty of others like Waves, BitShares, Chainlink, Nem, etc which are also penetrating the market. It's not possible to study each and every one of them, instead focussing on the top few, according to me, could help better. The best can be chosen based on your needs. Do the required due-diligence of the platforms on the basis of its documentation, build tools, SDK, etc. and choose the best fit for you.

Let us know your thoughts on the different available platforms in the comments below.