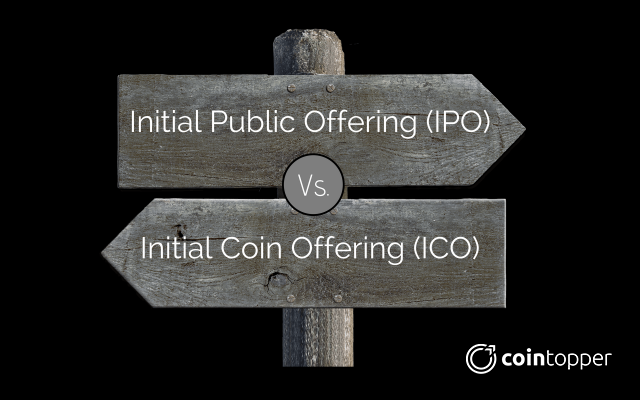 Blockchain technology is all set to radically transform global trade, institutions and firms that govern it. As this technology finds a new way to upheaval the way we design, make, deliver and coordinate the use of goods and services globally, entrepreneurs have started using artificial intelligence to raise funds for their business.

The concept of ICO has become very popular as a means to raise capital and provide liquidity for its operations.

Initial Public Offering (IPO), also called “going public”, is a process through which a company goes from private to public by issue of stocks/ shares to the general public.

It is the first time that a company invites the general public to participate in the ownership of the firm. IPOs are generally issued by firms that are new and small hat wish to expand their capital base. It can be understood as a money making move wherein the basic idea is to raise funds and increase liquidity by the sale of shares. The money can be then used for the expansion of business, reinvestment, infrastructure, etc.

For IPO a company issues a prospectus that is filed with the Securities and Exchange Commission. The company with the underwriter decides the price of the stock as the date of IPO approaches.

The primary advantage of going public is that a firm can use the cash for research, infrastructural development, expansion. A newer, lesser firm can gain publicity and expand its business opportunities by reaching a large pool of investors. They attract fresh and new talent by offering perks like stock options.

Owing to various advantages of IPO, there is a tradeoff between a firm's’ private benefits and loss of these benefits whenever a firm goes public and the gains from diversification. The process of IPO demands a lot of time that might deviate business leaders from their business and hurt profits. The timing of an IPO plays an important role in firms value and evolution of firms’ risk over time. Stock prices are highly volatile and are affected by investor’s confidence.

Blockchain technology and cryptocurrency have gained a lot of attention from investors in the recent past. Initial Coin offering or has become an important source of fundraising by the firms especially startups. In order to avoid the expense of initial public offer and the hassle of convincing a venture capitalist to invest in the company, firms have found a way out using blockchain technology.

The ease of transacting and exchanging through crypto-tokens, use of smart contracts has captivated firms to rely on the community to raise capital. ICO has a larger reach and appeal to the audience and is much simpler than IPO.

ICO is a means of crowdfunding through creation and sale of digital coins or tokens. Under ICO, smart contracts assign various functions to the cryptocurrency token holders. These tokens act as shares/stocks entitling token holders with certain rights over the platform’s future. Token holders are free to sell these tokens and close their relationship with the company at any point of the time.

ICO fulfills two purposes - creation of crypto token and crypto coin that has its own feature and blockchain. Startups produce a white paper that describes their business model and technical approach. This document defines the maximum number of tokens that can be created. Once created these tokens are then issued for sale to the public. About $7.3 billion has been raised through ICO till 2018.

Difference between IPO and ICO | The Ultimate Face-Off

There are various distinctions between ICO and IPO. As ICO market grows, these differences are bound to fade away.

- Equity sale through IPO gives shareholders right to vote and claim in company’s equity whereas in the case of ICO. the token holder does not have any voting power or claim on company’s equity. Investors have a claim over the usage of the token.

- ICO are generally issued by startups and newer firms to raise working capital whereas IPO typically issued at a later stage by the companies to raise long-term capital.

- There is a close connection between exchanges and companies. It is mandatory for an IPO to be listed with an exchange to sell shares. ICO, on the other hand, are not obligated to list on any exchange,

- Allocation of shares under IPO is much more sophisticated than ICO. Banks provide guarantee aa an underwriter to buy shares that investors fail to buy. There is a large number of beneficiaries like the exchange, brokers, underwriters in case of IPO. ICO reduce middlemen and their margins.

- The process of IPO is very lengthy and time-consuming. It takes around 4-6 months to get the approval from the regulatory authorities. The duration of this process under ICO is short and simple

That’s all with the differences, Hope it would've proved helpful enough!
Let us know your thoughts below!!