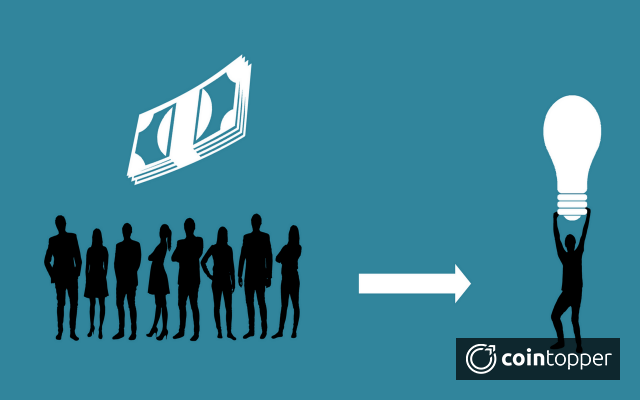 There has been a widespread confusion over these two terms: Crowdfunding and ICOs. Even though being closely related in terms of technicalities, still there exists a thick line difference between the two. Let’s get to know them one-by-one below.

Crowdfunding is a process of raising funds through mutual efforts of family, friends, individual, investors, etc. it is a method of raising the monetary contribution for funding a venture or a project primarily via the internet.

Crowdfunding is very different from traditional arrangements of business finance. Traditionally, when firms want to raise capital or launch a new product, they rely on banks, investors, venture capital firms. This limits their option to a few key players leaving no room for the new sources of finance.

Crowdfunding gives entrepreneurs an opportunity to raise millions of funds from anyone who is willing to invest by providing wide fundraising options. Crowdfunding platforms like Kickstarter and Indiegogo allow millions of accredited customers to connect, centralize their fundraising campaigns and eliminate duplication of efforts.

How does it work?

Crowdfunding is an emerging sector that is still developing. It offers a wide spectrum of fundraising campaigns for finance, community-based projects, etc. Crowdfunding websites offer an overview of the project that one has pitched for and allows to invest and gain various other details about the project. There, details include information about how much a company wants to raise, the purpose of seeking funds, how many investors have already invested, returns, etc. Investors also have a 14 day “cooling period” in case they want to change their mind.

There are different types of crowdfunding methods namely reward based, donation based and equity crowdfunding:

Donation-based crowdfunding can be understood as a campaign where there is no financial return to the investor. It includes fundraising for disaster relief, charities, , etc.

Under Reward-based crowdfunding, investors contribute in return of some reward in form of product or services offered by a firm. Despite the reward it is still considered a subset of donation-based crowdfunding as there is no financial or equity return.

Equity-based crowdfunding allows investors to become part of the company. Equity owners are entitled to receive the financial return for their investment in terms of share in profits.

So, this was all about Crowdfunding, Now let’s jump to ICO!

Initial Coin Offer has also emerged as a popular source of raising funds especially startups. In order to avoid the expense of initial public offer and the hassle of convincing a venture capitalist to invest in the company, firms have found a way out using blockchain technology. The ease of transacting and exchanging through crypto-tokens, use of smart contracts has captivated firms to rely on the community to raise capital.

ICO is a means of crowdfunding through the creation and sale of digital coins or tokens.

Under ICO, smart contracts assign various functions to the cryptocurrency token holders. These tokens act as shares/stocks entitling token holders with certain rights over the platform’s future. Token holders are free to sell these tokens and close their relationship with the company at any point of the time. To know how to invest in ICOs, refer to this article

ICO fulfills two purposes creation of crypto token and crypto coin that has its own feature and blockchain. The process of ICO starts with the creation of white paper that describes their business model, the amount of money needed, the duration of the campaign technical approach, etc. This document defines the maximum number of tokens that can be created. Once created these tokens are then issued for sale to the public.

Difference between Crowdfunding and ICO

Accessibility: Unlike ICO, Crowdfunding projects are confined to a certain region or country. ICO has a greater reach and is accessible to a large number of participants. New token sales attract a large number of people as ICOs are advertised well on social media and other platforms.

Product: Crowdfunding uses a multitude of ways to gather people like textile, technology, software, etc. their main aim is to gather maximum investors to make the product launch successful. ICO primarily revolves around blockchain technology and are more tech savvy. There have been various ICO for ESports like Unikorn, banking such as BABB, Bancor, etc.

Return on Investment: Crowdfunding such as donation-based crowdfunding does not provide any returns whereas people always invest in ICO with an aim to earn the profit. ICO participants get a white paper as a proof of their investment and share in the company.

Risk: Any sort of money exchange between parties involves risk. Therefore both ICO and crowdfunding are risky, though the degree of risk varies. Since ICO investment offers returns to the investor, which makes it than crowdfunding.

Regulations and Legitimacy:  ICOs are more lenient than Crowdfunds as the main motive of the company holding ICO is to gain maximum investors. Crowdfunds are more legitimate and regulated as the involve patents, intellectual rights government. The products undergo various tests to ensure that they are safe for use by the public.

Hope this article would’ve helped you resolve your confusions regarding the crowdfunding and ICOs. Let us know your thoughts below!!