Everything you should know about EOS, on its Blockchain Launch Today! 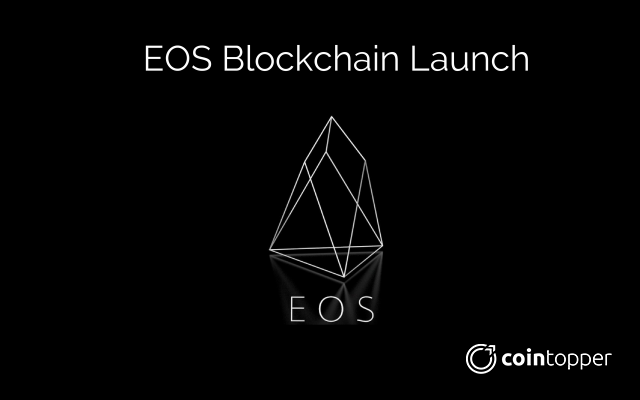 EOS uses delegated-proof-of-stake and introduces the ability to fix bugs and rollback changes with supermajority consensus.

EOS.IO offers flexibility in the development and maintenance of through various features. Its ownership structure promotes free usage by the user and eliminates transaction charges as developers are allowed to utilize resources in proportion to their stake instead of the standard pay-per-transaction model. This also makes it easier for app developers to predict hosting costs and allows them to create effective monetization strategies.

EOS.IO uses delegated proof-of-stake and a role-based permissions concept, which allows flexibility to make instant high-level decisions, like rollback, freezing and bug fixing of broken apps, through a majority accord among designated stakeholders.

What Problem does EOS Solve?

The EOS vision is to build a blockchain platform that can securely and smoothly scale to thousands of transactions per second, all while providing an accessible experience to app developers, entrepreneurs, and users. They aim to provide a complete operating system for decentralized applications focused on the web by providing services like user authentication, cloud storage, and server hosting.

And this Vision is getting true in a couple of minutes!! Yes, EOS is about to launch its Blockchain!!

The latest EOS updates have enabled shared database access between accounts and the ability to store user data on a local machine, off the blockchain.

Recovery for stolen accounts is baked into the system as well, with various methods of proving your identity and restoring access to a compromised account.

Keep It In the Cloud

The developer will have access to using analytics for storage and bandwidth directly from EOS, and be able to set limits for specific applications to whatever levels they choose. These services are paid for by staking EOS tokens.

When using consensus over events, the focus is on the transactions (or simply messages) as opposed to the state. Instead of verifying the state of the network at any given time, nodes verify the series of events that have occurred so far to keep track of network state. The result is a system that takes longer to completely reconfirm the history of transactions when restarted but can handle a much higher throughput of transactions while running.

What this means in plain English is that the EOS network can scale to one million messages or transactions per second out of the gate on a single machine, with theoretically infinite scaling possible in parallel between multiple machines.

An application built on the EOS platform does not REQUIRE micropayments by end users to send messages and perform tasks on the blockchain. This is left up to the individual app developers to determine how transactions fees (which are extremely low) will be paid, meaning companies are free to come up with their own monetization strategies and offer their users service for free or not.

The EOS system provides a governance model based on block producers than can vote on which transactions are confirmed, whether an application is running correctly and on changes to the source code of individual applications as well to the EOS system itself. This means that the community can actively upgrade, downgrade, and fix bugs in the system in a democratic and secure manner.

The EOS system reduces the latency and maximizes performance by structuring each block (produced every 3 seconds currently and being tested at 0.5 seconds) even more finely into “cycles,” which are sequentially performed. Cycles are in turn structured into “threads” that run in parallel within cycles. This allows for messages and transactions to be sent and responded to within single blocks and between blocks, bringing the theoretical bottom limit to the response time down to simply message transmission time over the net.

There are a lot of technical features and details left out here, and if you’re interested in diving into the nitty gritty I would head over to the Technical Whitepaper.

EOS is an open source platform, like Ethereum, that will support decentralized applications.
But, unlike Ethereum, the proposed platform is far simpler, allowing businesses to develop decentralized applications without a heavy technical background. The tools are going to be built into the program. And, this makes EOS a phenomenal tool for companies that are trying to control and monitor information flow without too many complications.

All of these traits should have Ethereum shaking in its boots.

With the EOS Mainnet Launch all set for launch, the picture will be much clearer soon!!

The TEAM Behind EOS...

The core team behind EOS is “Block.one”, which is based in the Cayman Islands. Brendon Blumer, the CEO, has been involved in blockchain since 2014. He has previously been involved in companies which dealt with currency exchanges in MMORPGs and in the real estate.

Dan Larimer is the CTO. He is the creator of delegated proof-of-stake and decentralized autonomous organizations aka DAOs. He is the also the man behind BitShares and .

The launch of the EOS blockchain is right away!!

As foreseen, candidates for the role of validators or "block producers" (EOS's equivalent of bitcoin miners) located all over the world voted "Go" to take the live.

With all the votes coming in, it's turning all the doubts and speculations of people about the future of EOS

EOS Mainnet Launch Group () was formed by gathering of associations competing to serve as block makers. They have so far figured that they would launch one for EOS.

more than 100 candidate associations took part in a call that began gathering at 1:00 UTC Saturday and the vote happened approximately 45 minutes after the fact, as more than 1800 individuals viewed. The vote to "Go/No Go" was consistent over the gathering spilled on YouTube by EOS GO.

With this vote, as per the arrangements made, the initial network ought to be stood up at 13:00 UTC.

EOS goes live once 15 percent of tokens extraordinary have been staked to votes and the principal set of chosen block producers have been built up.